It's safe to say that tides affect the quality of the surf a lot.

So as you'd imagine, knowing the best tide to surf is kind of a big deal.

Unfortunately though, deciphering the best tide to surf is far from an empirical science - what's more, it changes from spot to spot 😬

So instead of definitive answers, what you really need instead is the knowledge

The knowledge to be able to rock up to any beach - anywhere in the world - and instinctively understand what the best tide for surfing that particular spot will be.

Armed with this new-found knowledge choosing the where to surf and when will be a breeze.

HOW DO TIDES AFFECT THE SURF

The tide affects the surf in a number of ways 👇

As tides move in and out it affects the depth of the water, altering the way the waves break as a result.

Let’s imagine somewhere with a big tidal range for a moment, say Hossegor in France (has 8M+ tidal range!)

The low tide mark may be some 200m further out to sea from the high tide line.

Do you think this will change the way the waves break a little?

Damn right it does.

Now let's add a reef into the equation for illustrative purposes.

At low tide the reef is just a rocky outcrop - fully exposed rock not covered by any water.

When the tide comes in however, all that changes.

As the tide moves over the reef waves begin to break, and once enough water has covered the rocks the waves become surfable.

The same thing that happens to this reef happens to every sandbank, at every beach break too, with the water depth drastically affecting the way the waves break.

Not only does the depth of the water affect the surf, but the direction of the water is moving impacts the waves too.

Water moving out to sea.

Oftentimes waves will be bigger on incoming tides as the waves are able to move to shore unimpeded with the flow of the tide rather than against it (think of it like those flat escalator thingy’s that you lazy people jump on in airports. Guilty 😬).

Now imagine that same wave moving to shore, but this time, the escalator thingy is moving the other way (tide going out).

Probably going to hold the wave back a bit right?

This isn’t a hard and fast rule as many surf breaks improve in quality with an outgoing tide, but something to keep in mind nonetheless.

The mass of the ocean moving in and out also affects rip currents too, which can wreak havoc on a good bank in minutes. 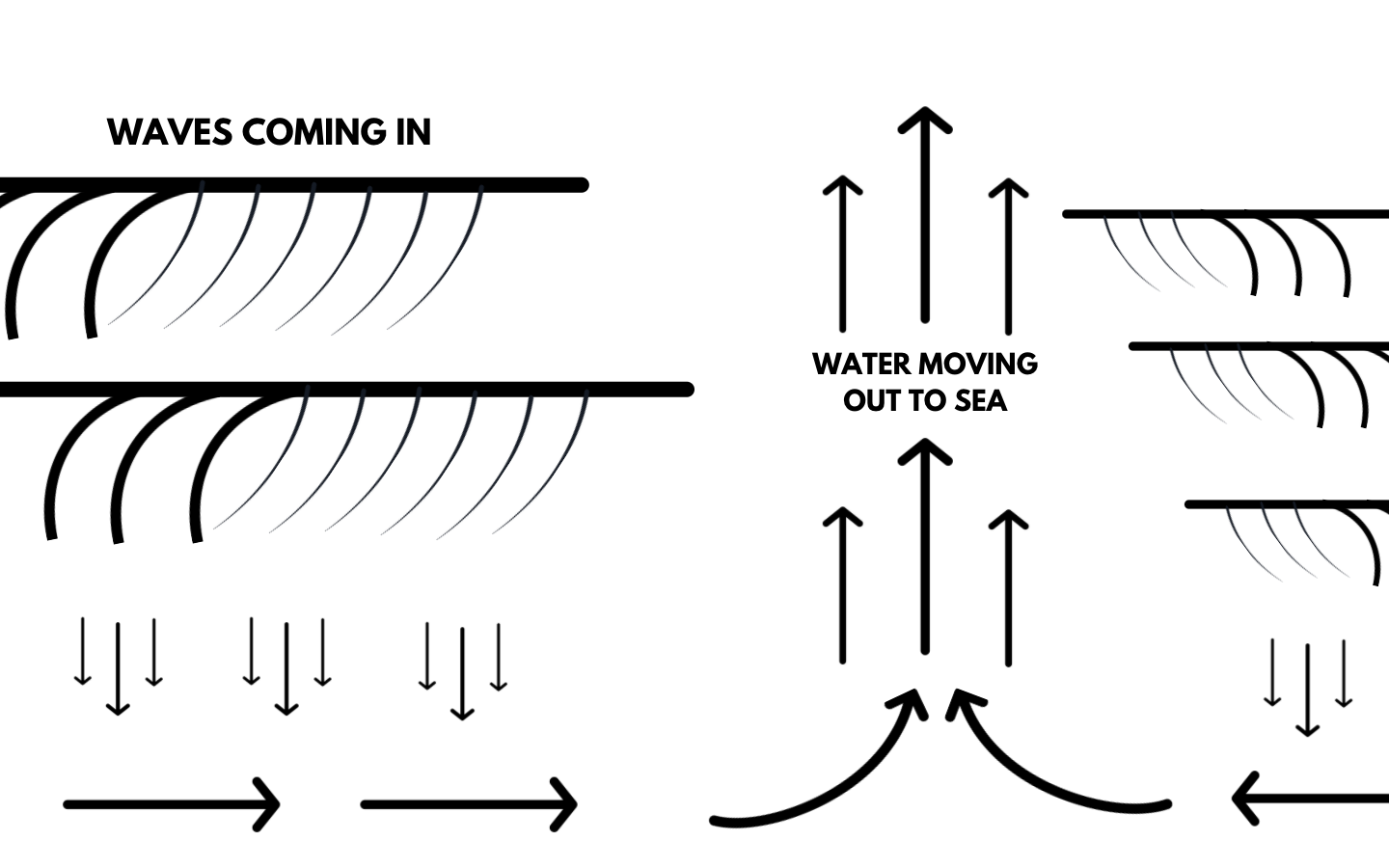 But, it can also do the opposite too (bloody love a good rip bank me 👊).

In short, with big tides there’s a whole lotta water moving around and this impacts the quality of the waves, for good and for bad.

Different spots have their different personalities that it takes time to get to know.

BEST TIDE TO SURF FOR BEGINNERS

The best surf conditions for a beginner are soft, playful, rolling waves that give you plenty of time to do what you’ve gotta do and get to your feet.

ALL surf breaks are different, and they’re all affected in slightly different ways with the movement of the tides, and this makes it difficult to give you a conclusive answer as to what the best tide to surf for beginners is.

But I’ll give you some good guidelines nonetheless 👇

On flat beaches (beaches without a steep sand shelf at the high tide mark) you’ll generally get the best waves at high tide.  This is because the water fills in over the sand banks, oftentimes leading to soft peeling - beginner friendly - waves.

On steep beaches however, you’ll want to surf between mid and low tides.

Well, high tides at steep beaches either cause the waves to stop breaking, or result in heavy, dumping shorebreak type waves - not ideal for beginners. Whereas the mid to low tides avoid the steep sand bank and allow the waves to break more softly, and more playfully as a result.

IS IT BETTER TO SURF AT HIGH OR LOW TIDE?

With every surf break having its own unique characteristics it’s impossible to definitively say it’s better to surf at a high or a low tide - it really does change from spot to spot.

Not only that, but individual surf spots will often change which tides they break at best with the ever changing sandbanks that are formed.

So, rather than looking for conclusive answers for “is it better to surf at high or low tide?”, the better approach is to learn the beach characteristics instead so that you know what to look for when analysing a new spot.

Surfing at high tide can be a bit of a mixed bag.

If you’re surfing the wrong spot the waves could grind to a halt and go flat, also, you run into the chance of surfing waves with a lot of backwash (more on that in a minute).

If you’re surfing the right spot however, you could be in for a treat!

You may just find yourself surfing a little punchie high tide shorebreak, with a few sneaky tubes here or there too.

Really though, like I’ve already said a bunch of times it depends massively on the set up of the beach in question.

Backwash refers to the waves created from surges of water rolling up a steep beach and rolling back out to sea.

This ‘backwash’ creates small waves that interfere with the incoming waves causing them to ‘jack-up’ as the two waves collide.

This jacking-up process makes the waves irregular and bouncy, making them much more challenging to surf as a result.

IS IT BETTER TO SURF AN INCOMING OR OUTGOING TIDE?

As a general rule most surf spots will break better on an incoming tide as the waves don’t have to battle against the tide to get to shore, resulting in more powerful waves.

And with the outgoing tide - and all of that water moving back out to sea - it oftentimes has the effect of stopping the waves in their track, slowing them down and making them weaker as a result.

But, you guessed it…

It really does depend on the spot.

You can flip and reverse all of what I’ve said above ☝️ and it’ll be correct too.

But as a general rule, this should serve you well.

WHAT TIDE IS BEST FOR SURFING?

Working that out must be done by analysing the beach topography, tidal range, and surf forecast as a whole too.

With that information at hand - and a little experience to boot - you should be able to map out and break down the best tide for surfing at each and every spot you visit within seconds.

Putting you at the best spot, in the best conditions, more often as a result 👊