Surfing’s Drop In Rule Explained Once & For All…

Ah, the drop in rule in surfing…

Often overlooked, frequently misunderstood, and occasionally ignored 😬 (do this at your peril).

And it’s this lack of understanding that:

But neither of these options has to be you.

Keep reading and get empower yourself with the knowledge to feel at ease in any lineup around the world.

WHAT IS THE DROP IN RULE

The drop in rule in surfing is the sports way of establishing order and safety in the lineup.

This surfer has the right of way, and has the privilege of surfing the wave uninterrupted.

WHY IS THE DROP IN RULE IMPORTANT

The drop in rule is important for surfers to create order in an otherwise chaotic environment, and maintain a level of fairness so that everybody can catch waves.

Surfers use it as a type of queueing system to determine who’s next in line to catch the wave, avoid the dangers of collisions, and allow the waves canvas  to be enjoyed by a single surfer.

“The surfer closest to the peak has priority over the wave”

What does that mean?

When a wave comes to break it has what is known as a peak (or an apex if you will) which is the part of the wave where it breaks first. 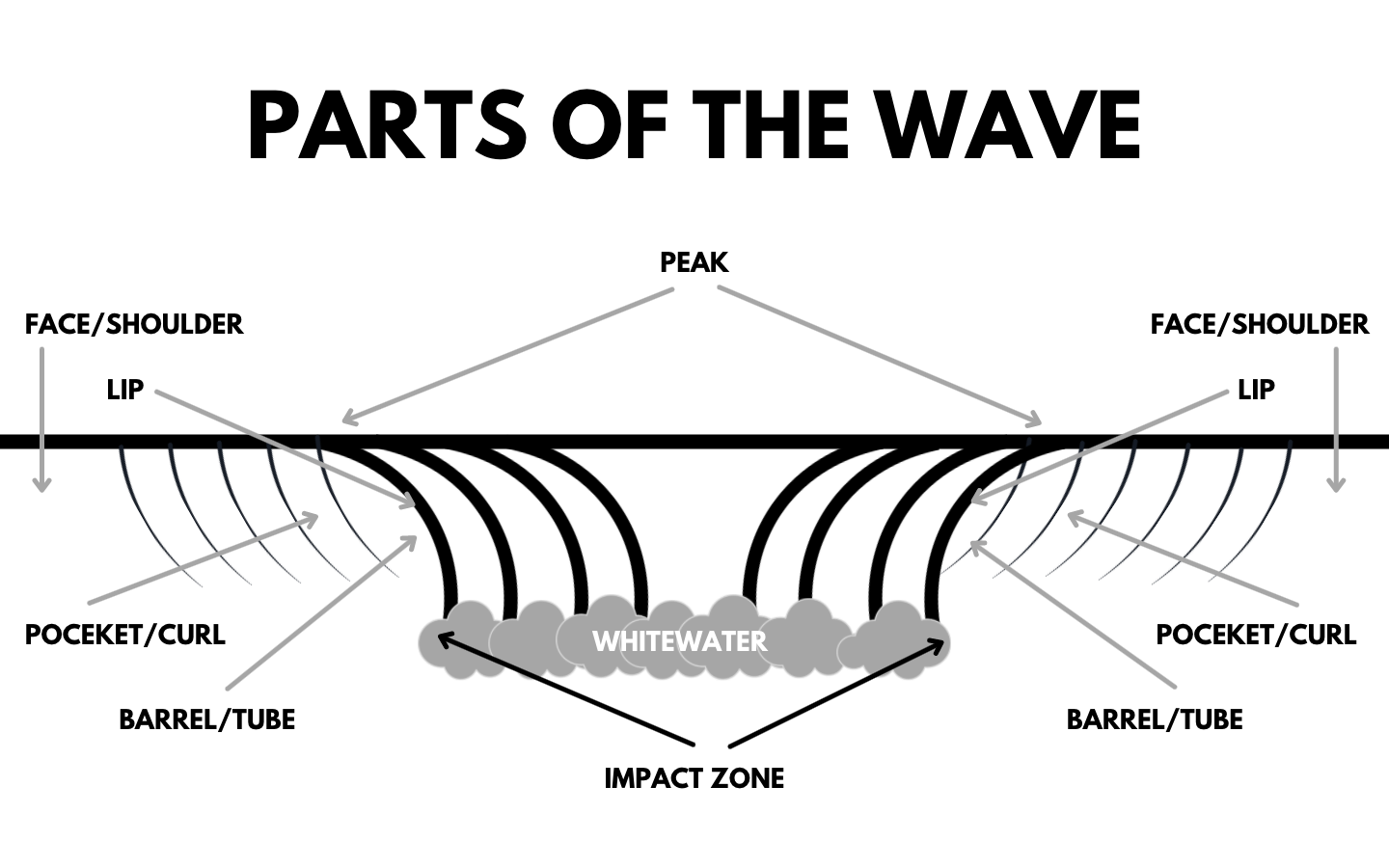 And the surfer that is closest to the peak - or the breaking part of the wave - has the right of way.

It’s a simple rule, and it works - but it does have a few complications as you’ll see in a moment.

PROBLEMS WITH THE DROP IN RULE

Surely if the surfer closest to the peak gets the wave, then why doesn’t everybody just paddle closer to the peak and take any waves they want?

This is true, and is where surf etiquette plays its part.

Just like in a traditional queue situation it’s possible to walk straight up to the front to get served, however, doing this is a dick move and is a great way to piss people off.

So it’s about understanding the queueing system - and your place within it - yet still paddling and competing for waves all the same.

NUANCES TO THE DROP IN RULE YOU NEED TO KNOW

Although the drop in rule is universal the world over and clear in its simplicity, surfers have the added complications of surf etiquette to contend with too, which affects the way the rule works in practice.

So here are some nuances to the rule you need to know:

THE DROP IN RULE ON A BEACH BREAK

Without a fixed, defined take off zone at a beach break surf etiquette plays less of a role.

With waves breaking here, there, and everywhere the queueing system kind of goes out of the window, and instead surfers stick to the simple drop in rule.

If you’re closest to the peak, it’s your wave.

It’s a bit like getting served in a bar, if you’re in the right spot at the right time to get served, then go for it.

THE DROP IN RULE ON A POINT BREAK

Surfing point breaks is where a bit of etiquette must come in (although often doesn’t) to avoid outright mayhem.

With waves consistently breaking in the same spot over and over again, there’s no ambiguity as to who’s in position to catch the next wave, and this is where the traditional queueing system must come back into place.

The surfer closest to the peak gets the first wave, the second closest gets the next, third the wave after that, and so on, and so on.

And once you’ve ridden your wave you to the back of the queue and wait your turn.

Works in theory, and kind of works in practice, although it’s never fully black and white.

MESSING UP THE ROTATION

To add extra complexity into the equation there are a few other things to consider.

There is also a hierarchy in surfing that effects the drop in rule slightly too.

Here’s how a typical hierarchy will look: 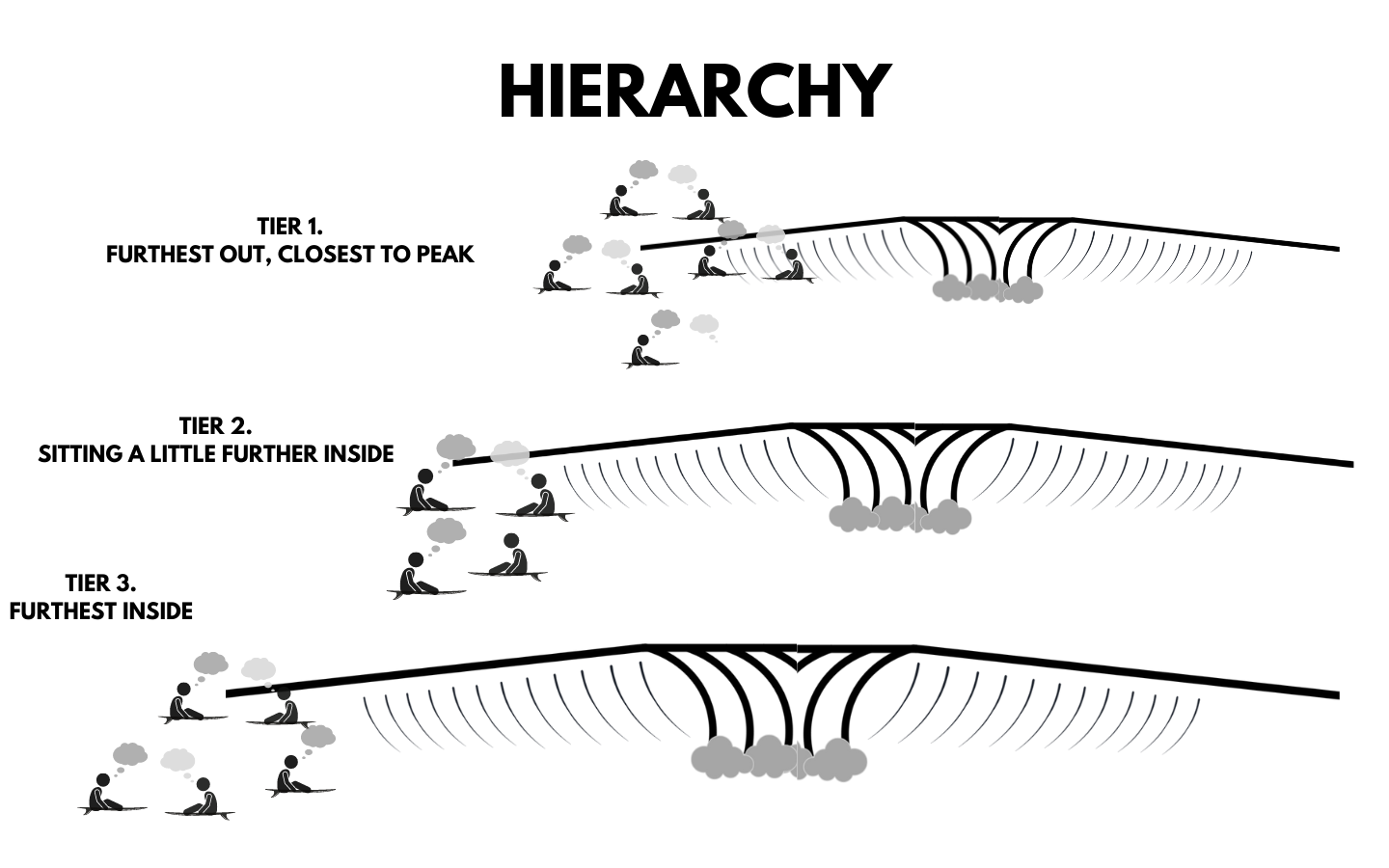 The higher up in the hierarchy you are, the closer you will be able to sit to the peak of the wave, and hence be higher in the pecking order.

This hierarchy is important to:

HOW TO AVOID DROPPING IN ON SOMEONE

First things first is to be aware of your surroundings.

Be aware of who’s around you, where the waves are breaking, and the levels of the surfers around.

Secondly, ALWAYS make sure that you are looking around you as you’re paddling for a wave.

Look left, look right, and if the coast is clear then go nuts.

Stick to this and you’ll be sweet.

I hope this article has helped you to fully understand the drop in rule and how it works, and with a bit of luck it's empowered you with the knowledge to no longer fear it, but embrace it.

Once you know the rules of the game, the do’s and don’ts then you can compete in for waves in a fair and safe manner - rather than sitting on the sidelines watching on.

So, get informed, and get hustling.