Ah, surfboard tail shapes and the plethora of choices…

So much to choose from, so much confusion.

Which is the right tail shape for you?

It's a minefield that's for sure, especially if you're a beginner new to the sport.

But not for much longer...

Read on, and all will be revealed…

HOW DOES THE SHAPE OF THE TAIL AFFECT A SURFBOARDS PERFORMANCE?

The tail-shape of a surfboard affects the way the board interacts with the waves face, and the water flowing through it.

Wider, thicker tail shapes have more surface area and help the board to float and create lift - allowing the surfboard to plane over the surface of the water more easily.

The wider and thicker the tail of a surfboard is, the more stable and more floatation it’ll have.

However, with all that extra buoyancy and stability comes a trade-off in manoeuvrability, with wider, thicker tails making it more difficult to transition from rail to rail and turn.

Thinner, narrower tail shapes have less surface area and buoyancy - this allows the tail to grip into the wave, and makes them more manoeuvrable as a result.

But, (you guessed it) they make the board much less stable and harder to ride in the process.

As with everything in surfboard design there’s a constant tradeoff between manoeuvrability and stability.

DOES THE TAIL SHAPE MAKE A BIG DIFFERENCE?

Yup, damn right it does.

More so the width and thickness of the tail than the actual tail shape itself (more on the different tail shapes in a minute).

Why does it impact things so much?

Well think about it, we’re all at different stages in the surfing cycle and we all have different requirements in our equipment to help us surf to our potential.

For example, if you’re a beginner and you’re riding a board with a super narrow tail you’re going to really struggle for stability, and it’s going to hold back your progression.

Likewise if you’re an experienced surfer and you’re surfing a board with a big wide tail, you’ll find it very difficult to turn and manoeuvre, hindering your ability to perform.

There are and endless number of different surfboard tail shapes, but all stem from four primary categories. 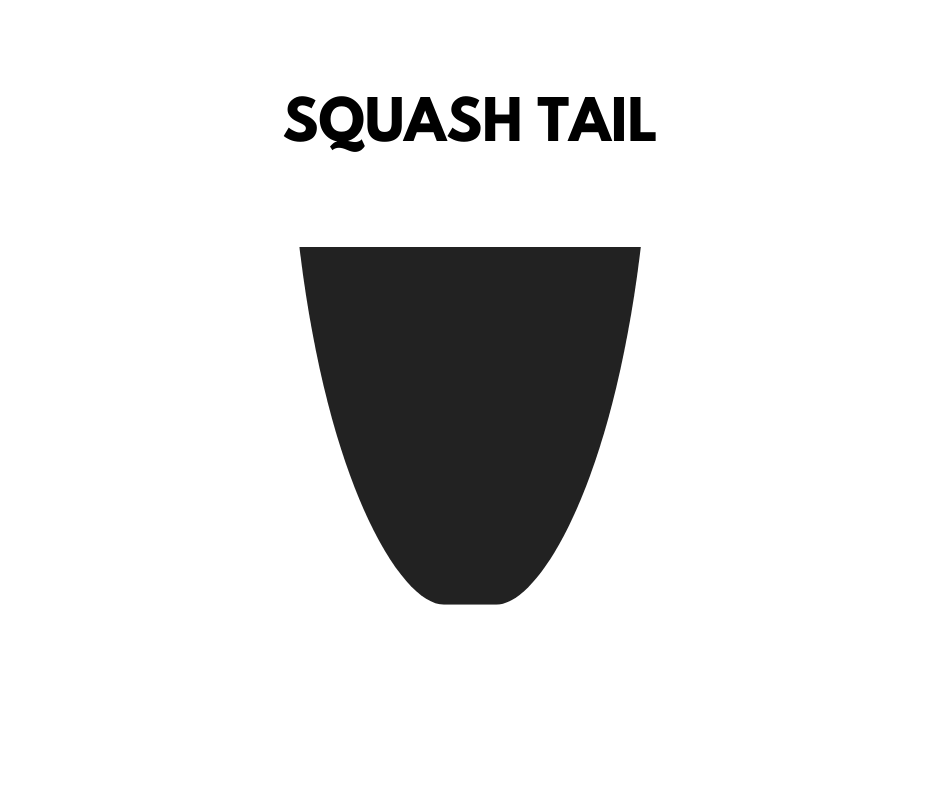 The squash tail is the most common tail shape you’ll see.

A blend if you will of the square tail and the pin tail, the squash is the all-rounder and tail shape of choice for most surfers in small to medium waves from 1-6ft.

The squash tail combines the large surface area of the square tail for stability and float, alongside the curved edges of the pin for grip and manoeuvrability.

The go-to tail shape for most surfers in most conditions for sure. 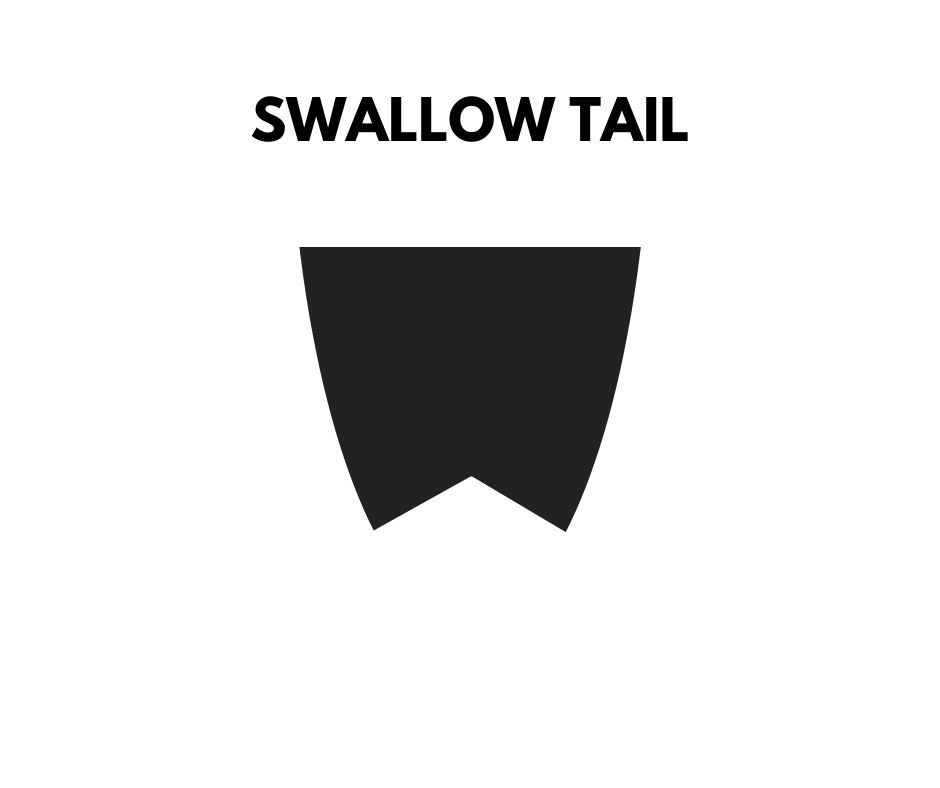 The swallow allows for a wider tail shape, yet the pointed corners create grip, helping the board to turn.

A good choice for speed and stability, alongside the ability to turn. 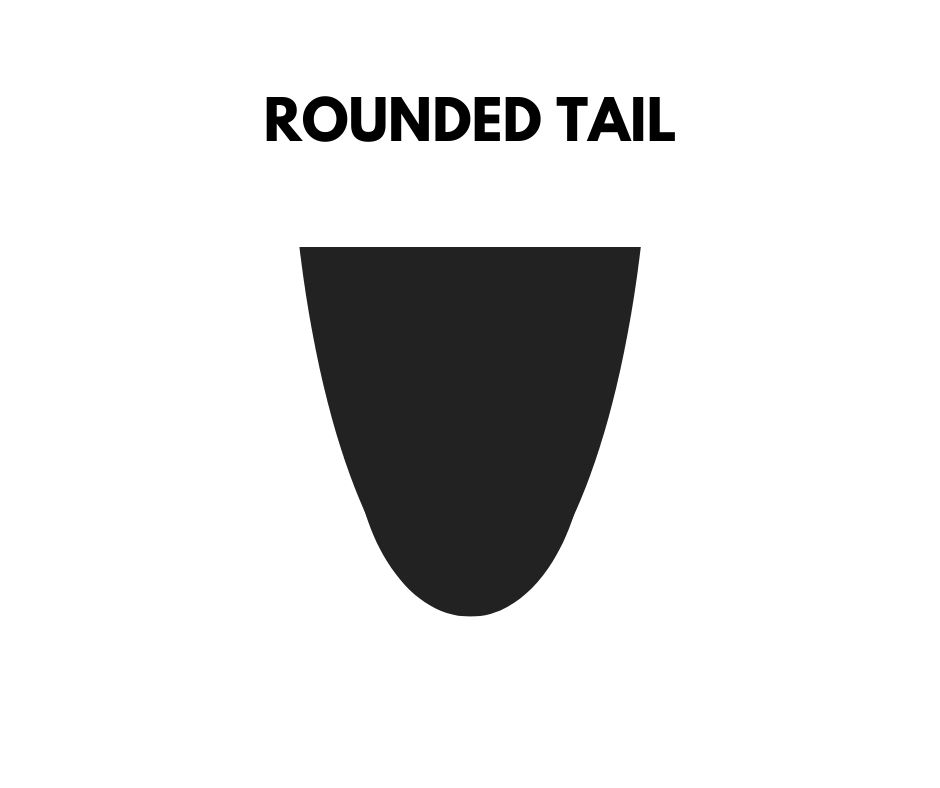 As speed is no longer an issue, instead the surfer is now looking for grip instead.

And with the pulled in nature of the rounded tail, a surfer is able to maintain grip into the waves face yet still maintain manoeuvrability 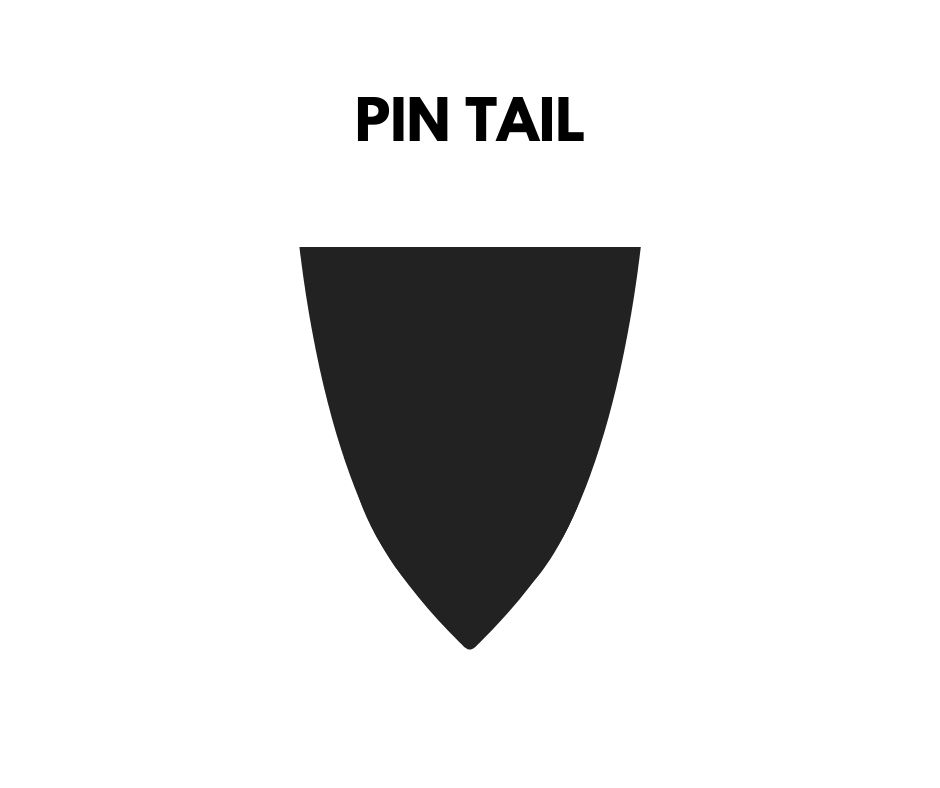 With big waves performance surfing goes out the window, and instead the sole focus is entirely on grip and straight-line speed.

OTHER TAIL SHAPES OF INTEREST 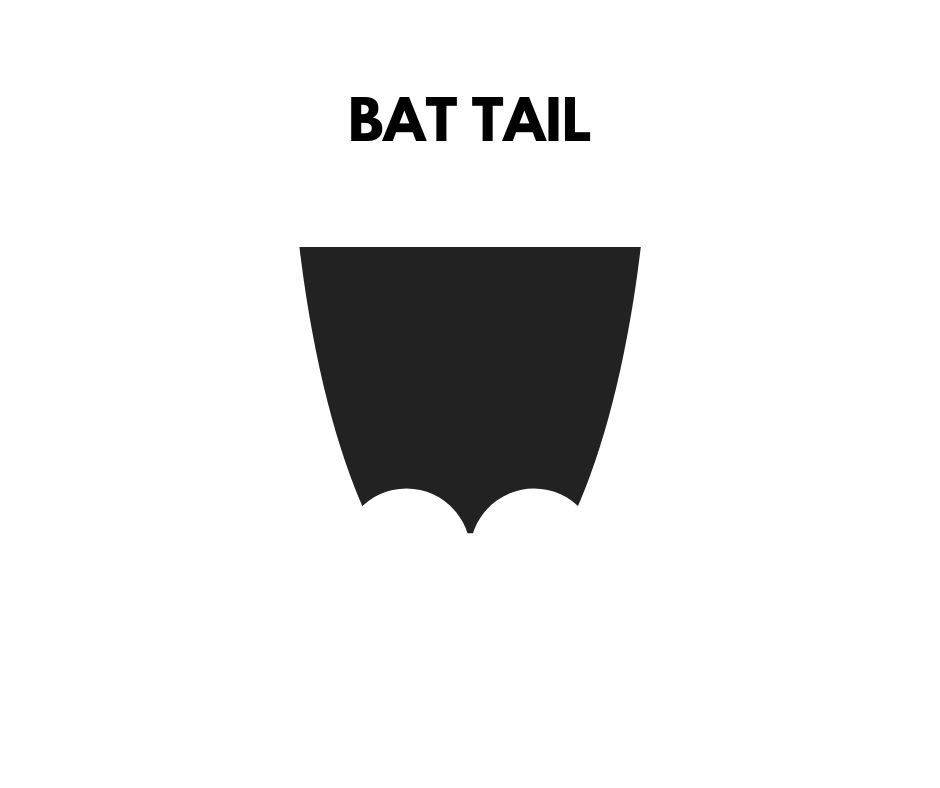 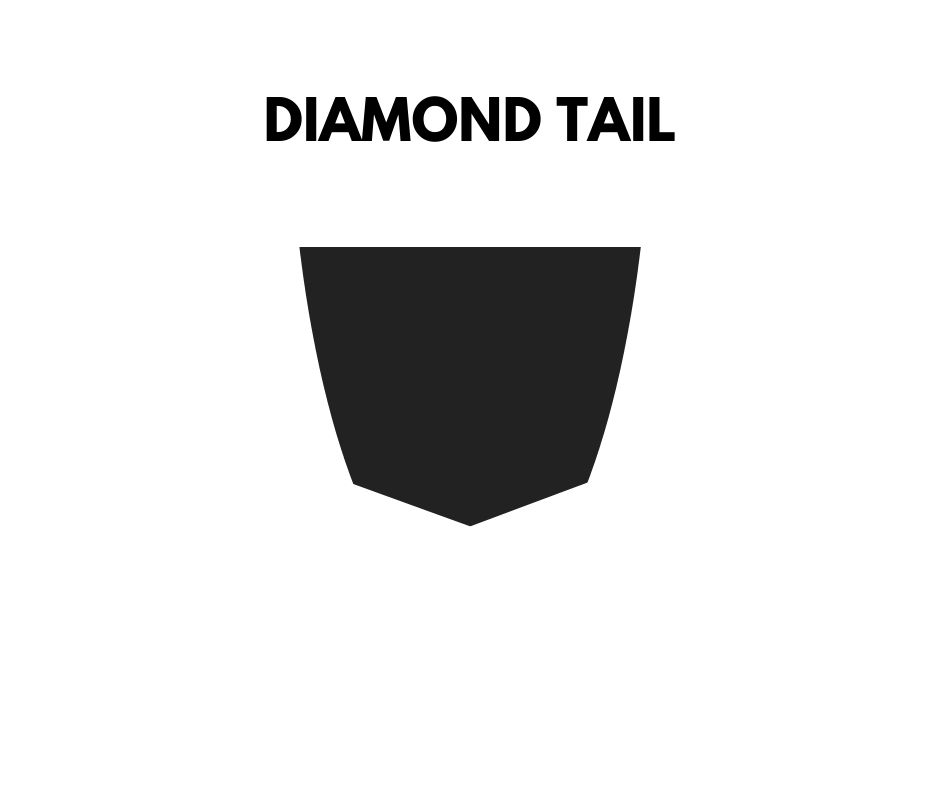 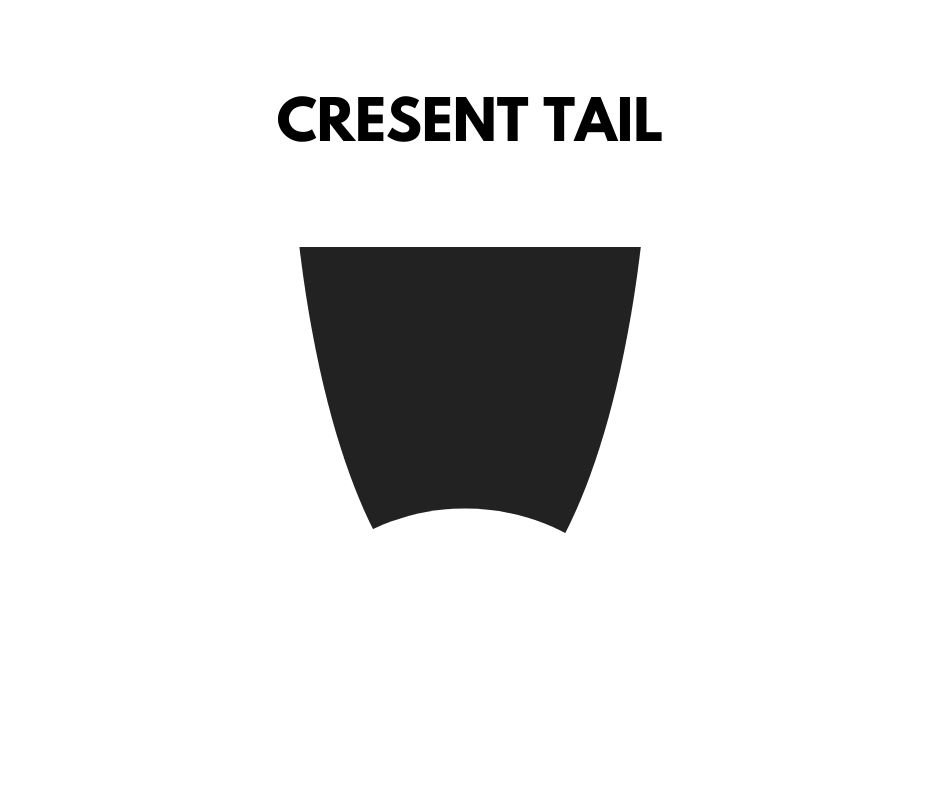 HOW TO CHOOSE THE RIGHT TAIL SHAPE FOR YOU?

The right tail shape for you will depend on the types of waves you like to surf, your ability, and the type of feel you’re looking for.

Here’s a quick guide to help you out.

Choose either a squash tail or swallow tail.

Choose either a rounded tail or pin tail.

The width and thickness of the tail you should choose will depend on your ability.

If you’re a beginner go for a big, thick, wide tail for maximum float and stability.

If you’re an intermediate to advanced surfer you can afford to scale things down and ride thinner more refined tail shapes for increased manoeuvrability.

There are a whole heap of different surfboard tail shapes out there to choose from, each with their own unique flavour and feel.

But don’t get hung up on the intricacies.

Well, you guys are somewhere in between 😬

*Got more questions? Chuck'em in the comments below 👇