However, since its introduction into the Olympics in 2021 surfings popularity has soared, with media giants like Netflix, ESPN, and Apple TV, all jumping on the bandwagon and showcasing surfing around the globe.

Whether the surfing industry's growth is a good or bad thing is up for debate, regardless it makes for some interesting statistics nonetheless.

And a whole lot more.

So without further ado, here's a roundup of the most news-worthy and bizarre stats around surfing.

Below is a roundup of surfing's world records setters: Biggest wave, longest tube, and more.

WHAT'S THE BIGGEST WAVE EVER SURFED?

The biggest wave ever surfed was ridden by Sebastian Steudtner at the iconic big wave spot Nazare, on the West Coast of Portugal in October 2020.

The record breaking wave took scientists 18 months to calculate its exact size with the final wave height measuring 86ft - making it the biggest wave ever surfed on record.

WHAT'S THE LONGEST BARREL ON RECORD?

The unofficial longest barrel ever ridden was by Koa Smith at Skeleton Bay, Namibia, in 2015.

Koa rode the sand bottom barrel for 27 seconds straight, with it all caught on camera to boot.

WHAT'S THE HEAVIEST WAVE EVER SURFED?

With no official record in this d

WHAT'S THE LONGEST WAVE EVER SURFED?

In 2006 Steve King rode a tidal wave on the River Seven for over 12kms. The tidal wave meanders up river and is thought to be the longest wave ever surfed.

Another contender is the wave caught by Picuruta Salazar on the Pocorora (another tidal wave) in the Brazilian Amazon. The wave was ridden for 37 minutes and was ridden for 12.2kms.

Insights into the surf industry as a whole, plus some juicy rich list gossip.

WHO IS THE RICHEST SURFER IN THE WORLD?

The richest surfer in the world is 11 time World Champion Kelly Slater, from Coco Beach, Florida.

After over three decades as an elite professional surfer Kelly Slater has amassed a net worth of  22 Million Dollars.

On top of Kelly Slaters lucrative sponsorship deals in the past, and his career of contest earnings, he has ownership in:

Plus he's the owner of a prized beach front home overlooking Pipeline, Hawaii valued over $7Million.

WHAT IS THE BIGGEST CONTRACT EVER PAID TO A SURFER?

The most lucrative sponsorship deal in history was a $30million dollar, 8 year deal given to Jon Jon Florence (pre pandemic) by Hurley.

Sadly however, Hurley controversially initiated a get out clause citing 'acts of god' to reneg on their contract obligations as the pandemic hit the company hard.

Since then, Hurley and Jon Jon have separated ways with Jon Jon turning his talents to his own surf clothing and apparel brand Florence Machine X. 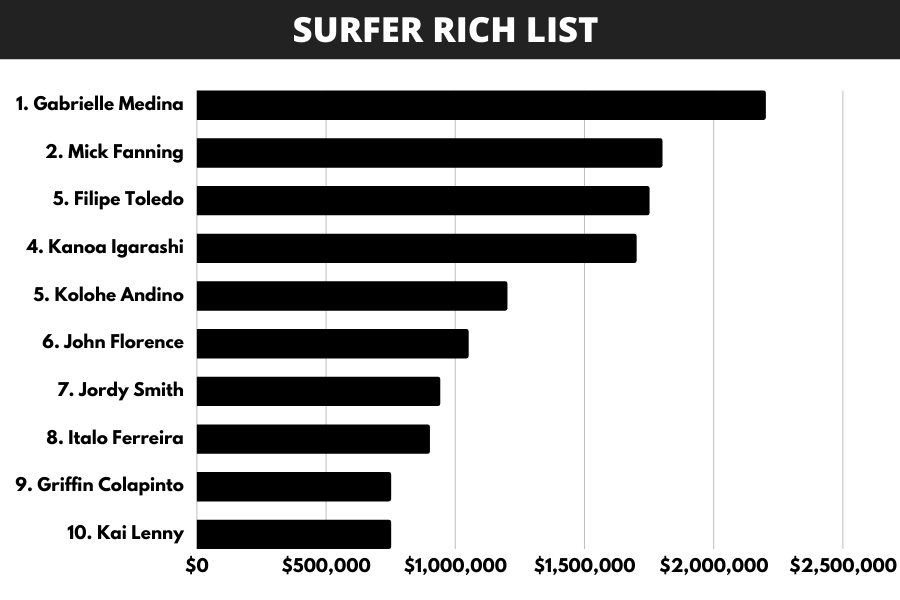 WHICH SURFER HAS WON THE MOST MONEY IN THEIR CAREER?

Unsurprisingly - with over 30 years in competition - Kelly Slater tops the list of highest career earnings.

WHAT'S THE BIGGEST PRIZE PURSE EVER WON AT A SURF EVENT?

In 2011 Owen Wright took home $300,000 in what is the biggest prize purse ever won by a professional surfer.

The event was his first ever WCT event win held at Long Island, New York.

HOW BIG IS THE SURFING MARKET?

Asia-Pacific is forecast to reach a projected market size of US$900 Million by the year 2027.

The US represents the largest market for surfing equipment

WHERE ARE MOST SALES GENERATED?

The US represents the largest market for surfing equipment

HOW MANY SURFBOARDS GET SOLD EACH YEAR?

The stat that blew me away the most was Koa Smiths 27 second tube. That thing was insane.

What else would you like to see added to this roundup? Is there something I've missed?

Either way, jump in and leave a comment below.