Tides & Surfing: How Tides Affect The Waves & Why

They kinda go hand in hand, but there's a lot more going on than meets the eye.

All good questions, and all will be answered in this post: What they are, how they work, why they do what they do, and everything in between.

And a whole lot more.

Get your nerd hat on, we’re about to go deep into how tides work 🤓

WHY DOES THE TIDE AFFECT THE QUALITY OF THE SURF?

Tides play a big roll in the way the waves break.

Imagine for a moment that you are surfing a reef break.

As the tide is high there is plenty of water covering the reef allowing for the waves to break nicely and to be easily surfed.

As the tide drops however, the water is removed from the reef making it too shallow to surf and the waves stop breaking.

No more surfing for you 😥

The flip side can happen too, whereby the water on the reef might be too deep for waves to break at high tide, and waves only break when the water is shallow enough on lower tides.

This same effect is at play at every beach around the world - just replace the reef with sand.

WHY ARE SOME SURF SPOTS AFFECTED BY THE TIDES MORE THAN OTHERS?

The tidal range of different places can vary significantly.

Do you think that might affect the surf a little 😬

Likewise in other areas of the world like Bali for example, the tidal range is just 2 Metres, effecting the way the waves break much less.

So, depending where you are in the world and the type of break your surfing, the effects of the tide will vary drastically.

SHOULD YOU SURF AT LOW TIDE OR HIGH TIDE?

The tide that will be best for you at your local spot will depend on a number of factors.

It just all depends on the spot.

If you haven’t already sussed out when your local spot is at it’s best just ask one of the local surfers, they’ll be able to tell you in heartbeat.

And if that doesn't work, check out Magic Seaweed, or buy a local surf guide book, that'll do the trick.

WHAT FACTORS AFFECT THE TIDE?

There are two primary factors that affect the tides on earth:

MOON: The moon has the biggest effect on the tides on earth accounting for roughly ⅔ to ¾ of the gravitational impact on the earth’s tides. 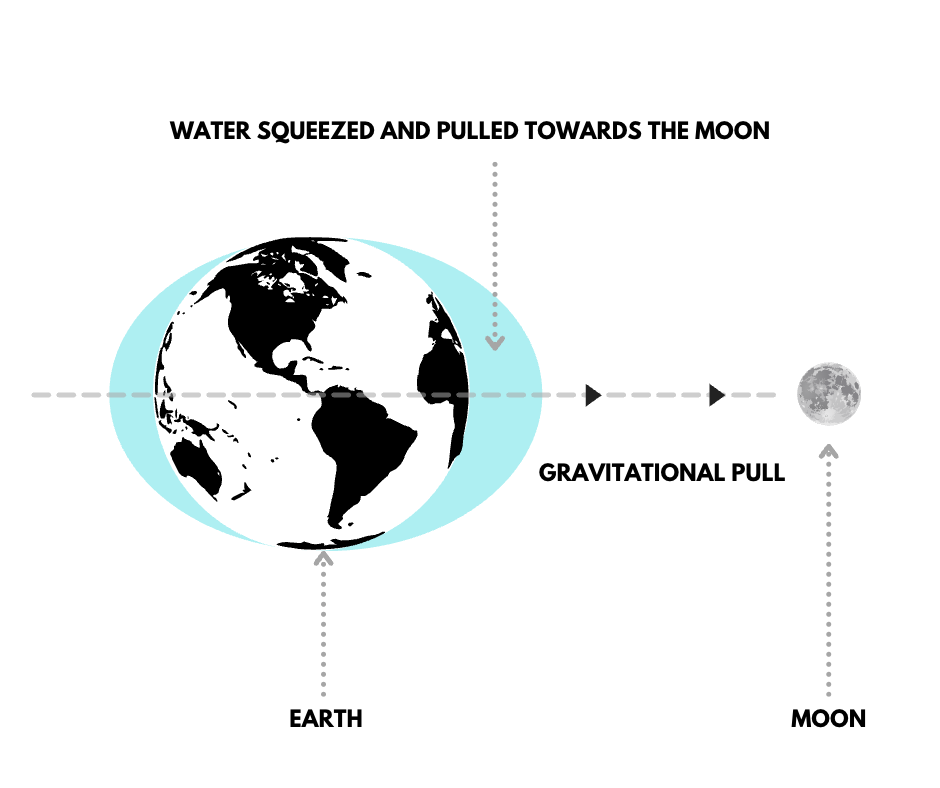 SUN: Although the sun is much larger than the moon its gravitational effects are felt much less because it is so far away.

The play between the moon and the sun - and their gravitational effects on the earth - are what create the variations in tidal ranges known as Neap and Spring tides.

More on that below 👇

WHAT ARE SPRING TIDES?

They happen when the sun and moon are in alignment and the gravitational pull is at its strongest. 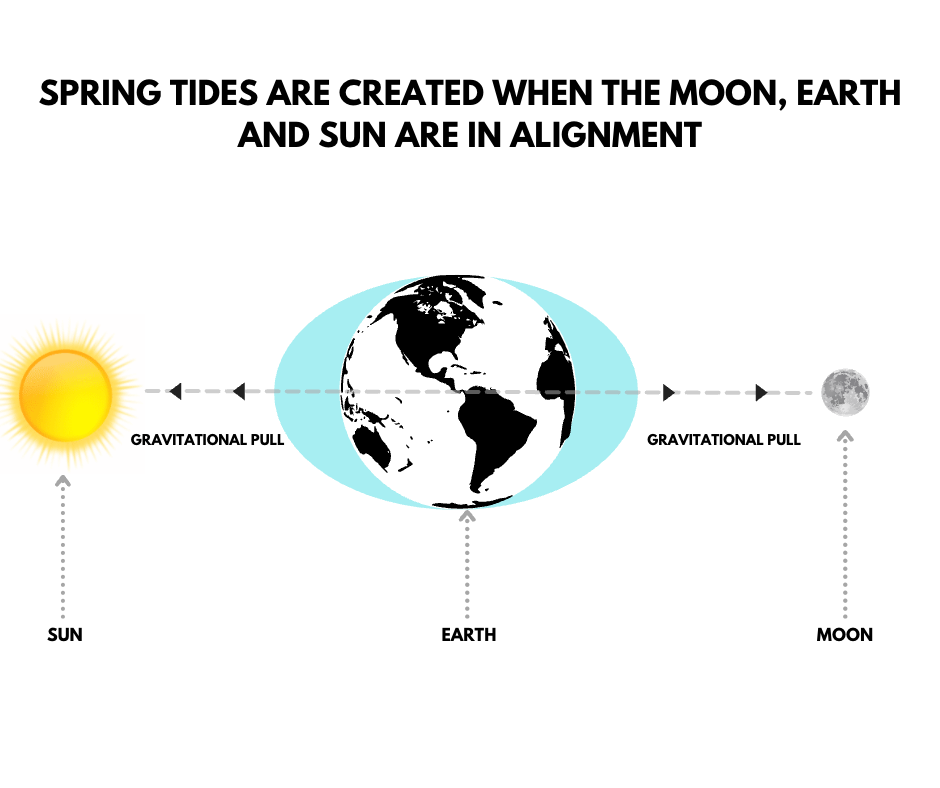 This alignment of the sun, moon and earth in a straight line is called a syzygy (when three or more cosmic objects come into alignment).

Bet you hadn't heard of that word before hey!

WHAT ARE NEAP TIDES?

Neap tides occur when the sun, moon and earth are out alignment (sun at 90° to the the moon).

This creates a gravitational battle where the forces counteract one another causing the tidal range to be at its smallest. 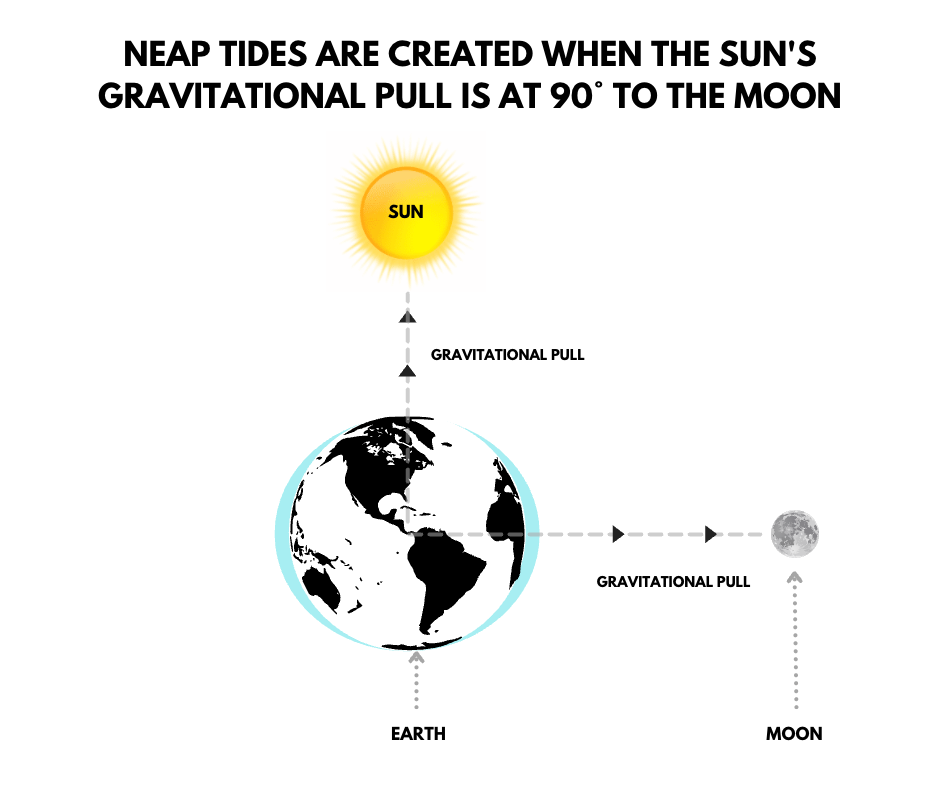 WHY DO THE TIDES CHANGE EACH DAY?

The times of the high and low tides change each day because on average you get a high tide every 12 hours 25 minutes, and this is why the tides vary day to day.

So as a rough guide when trying to figure out the time of the tides for the next days surf just add an extra half hour and that should do the trick.

THE TIDE DOESN'T ACTUALLY GO IN OR OUT

Yup, you read that right, the tide doesn't actually go in or out.

The water itself doesn't move in or out, instead it's the earth (and its rotations) that move through the bulging ocean as it moves through the sun and moons gravitational pull.

THE MOON'S GRAVITATIONAL EFFECT ON THE TIDES IS CONSTANT

Full moon, half moon, new moon - and everything in between - it has no impact whatsoever.

The moon's gravitational effect is constant.

What changes (and what effects the tidal range) is the position of the sun in relation to the moon.

In short, tides play a big roll in the quality of surf wherever you go.

So add this into your surf forecasting repertoire from now on.

Don’t just rely on winds, and swell, take into account the tides too, and you’ll be surfing the right spot, at the right time, every time.

More waves for you 👊